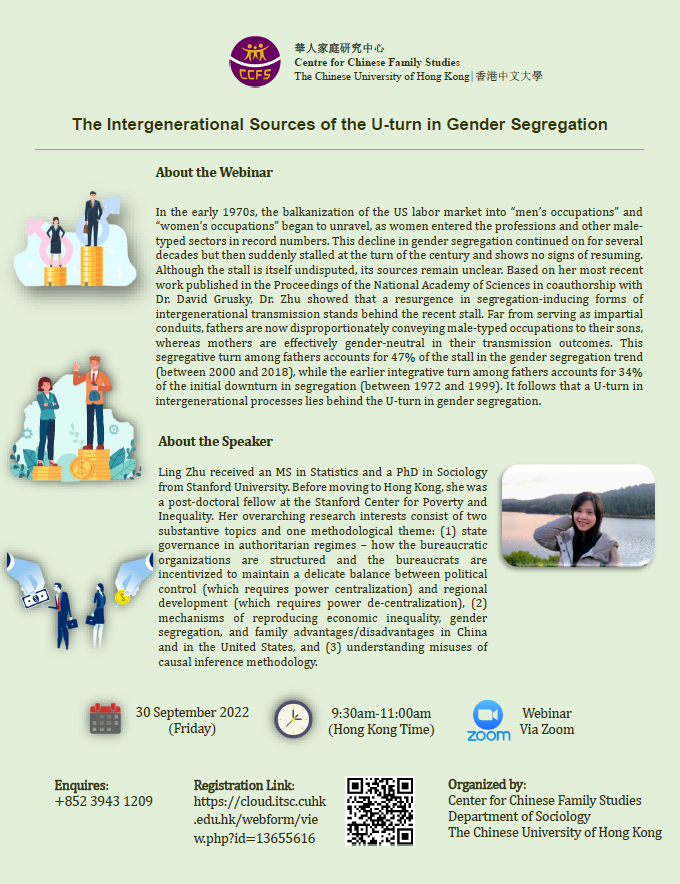 About the Webinar
In the early 1970s, the balkanization of the US labor market into “men’s occupations” and “women’s occupations” began to unravel, as women entered the professions and other male- typed sectors in record numbers. This decline in gender segregation continued on for several decades but then suddenly stalled at the turn of the century and shows no signs of resuming. Although the stall is itself undisputed, its sources remain unclear. Based on her most recent work published in the Proceedings of the National Academy of Sciences in coauthorship with Dr. David Grusky, Dr. Zhu showed that a resurgence in segregation-inducing forms of intergenerational transmission stands behind the recent stall. Far from serving as impartial conduits, fathers are now disproportionately conveying male-typed occupations to their sons, whereas mothers are effectively gender-neutral in their transmission outcomes. This segregative turn among fathers accounts for 47% of the stall in the gender segregation trend (between 2000 and 2018), while the earlier integrative turn among fathers accounts for 34% of the initial downturn in segregation (between 1972 and 1999). It follows that a U-turn in intergenerational processes lies behind the U-turn in gender segregation.

About the Speaker
Ling Zhu received an MS in Statistics and a PhD in Sociology from Stanford University. Before moving to Hong Kong, she was a post-doctoral fellow at the Stanford Center for Poverty and Inequality. Her overarching research interests consist of two substantive topics and one methodological theme: (1) state governance in authoritarian regimes – how the bureaucratic organizations are structured and the bureaucrats are incentivized to maintain a delicate balance between political control (which requires power centralization) and regional development (which requires power de-centralization), (2) mechanisms of reproducing economic inequality, gender segregation, and family advantages/disadvantages in China and in the United States, and (3) understanding misuses of causal inference methodology.