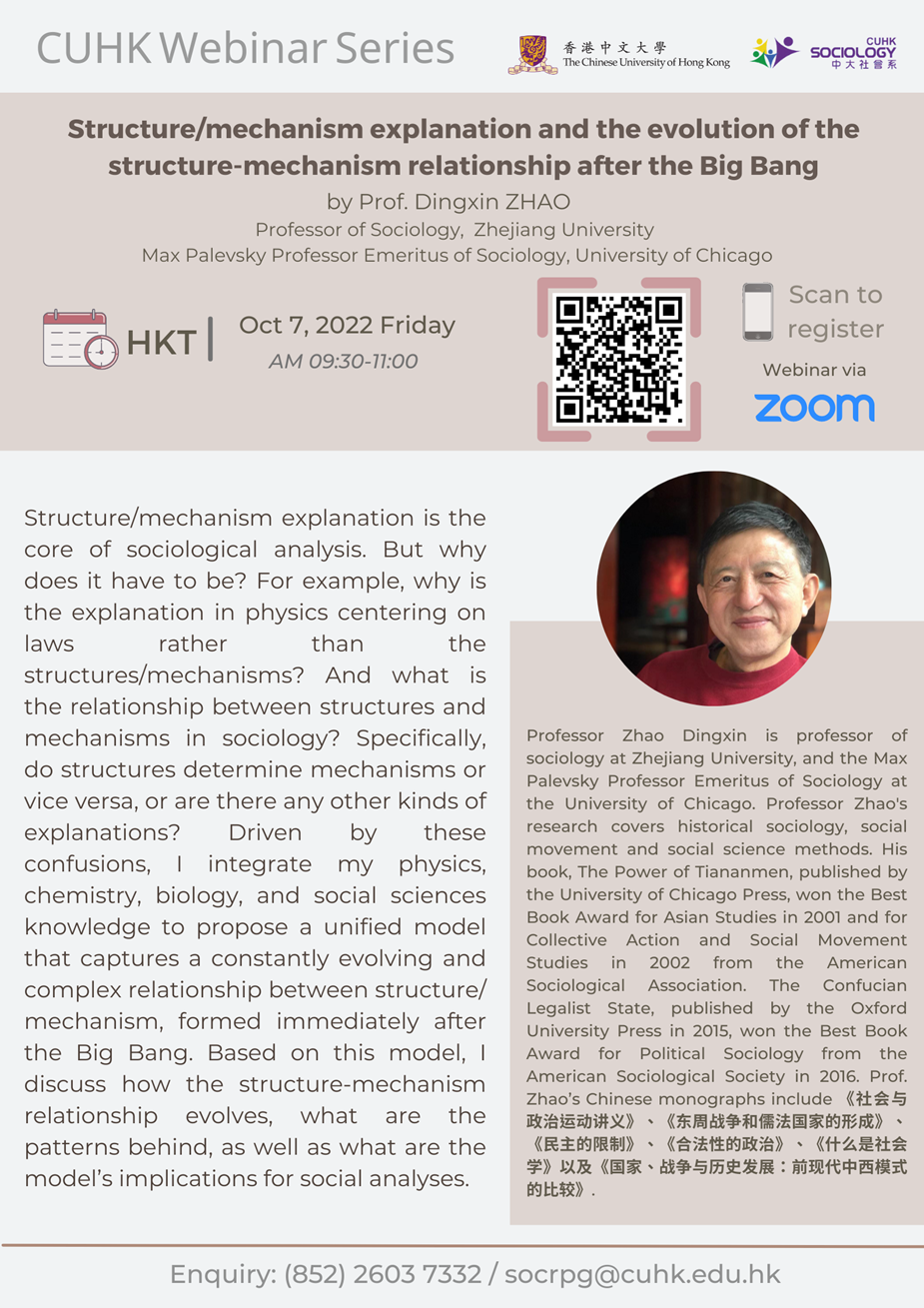 Structure/mechanism explanation and the evolution of the structure-mechanism relationship after the Big Bang
Speakers
Professor Zhao Dingxin
Professor of sociology at Zhejiang University, and the Max Palevsky Professor Emeritus of Sociology at the University of Chicago.
Date
07 October 2022 (Friday)
Time
0930 - 11:00 am
Venue
Zoom
Enquiries
+852 26037332
socrpg@cuhk.edu.hk
Registration
https://cloud.itsc.cuhk.edu.hk/webform/view.php?id=13656068
Details

About the Webinar
Structure/mechanism explanation is the core of sociological analysis. But why does it have to be? For example, why is the explanation in physics centering on laws rather than the structures/mechanisms? And what is the relationship between structures and mechanisms in sociology? Specifically, do structures determine mechanisms or vice versa, or are there any other kinds of explanations? Driven by these confusions, I integrate my physics, chemistry, biology, and social sciences knowledge to propose a unified model that captures a constantly evolving and complex relationship between structure/ mechanism, formed immediately after the Big Bang. Based on this model, I discuss how the structure-mechanism relationship evolves, what are the patterns behind, as well as what are the model’s implications for social analyses.

About the Speaker
Professor Zhao Dingxin is professor of sociology at Zhejiang University, and the Max Palevsky Professor Emeritus of Sociology at the University of Chicago. Professor Zhao’s research covers historical sociology, social movement and social science methods. His book, The Power of Tiananmen, published by the University of Chicago Press, won the Best Book Award for Asian Studies in 2001 and for Collective Action and Social Movement Studies in 2002 from the American Sociological Association. The Confucian Legalist State, published by the Oxford University Press in 2015, won the Best Book Award for Political Sociology from the American Sociological Society in 2016.