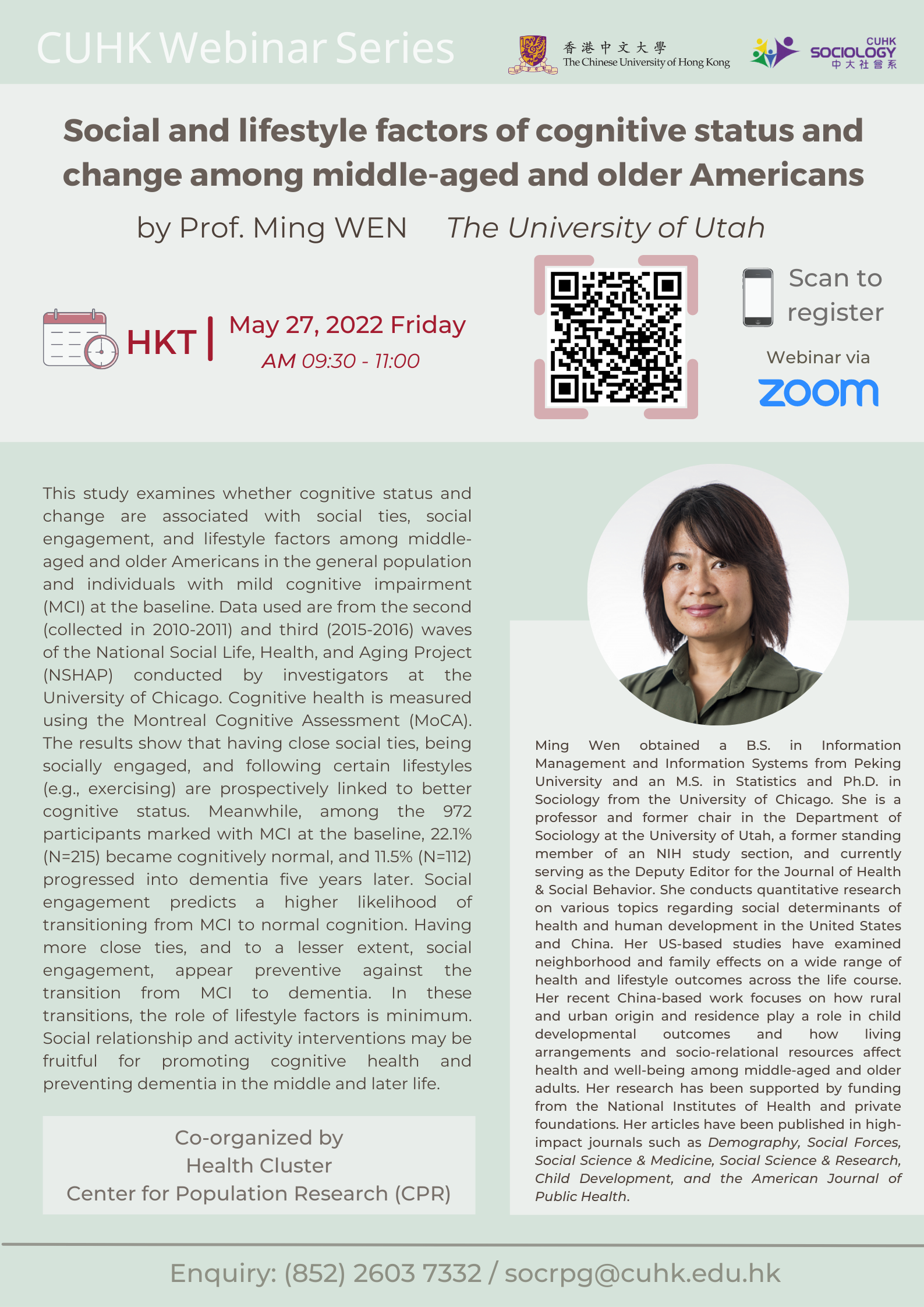 Social and lifestyle factors of cognitive status and change among middle-aged and older Americans
Speakers
Prof. Ming Wen, Professor of Sociology at the University of Utah
Date
27 May 2022 (Friday)
Time
0930 - 11:00 am
Venue
Zoom

This study examines whether cognitive status and change are associated with social ties, social engagement, and lifestyle factors among middle­ aged and older Americans in the general population and  individuals  with  mild  cognitive   impairment (MCI) at the baseline. Data used are from the second (collected in 2010-2011) and third (2015-2016) waves of the National Social Life, Health, and Aging Project (NSHAP) conducted by investigators at the University of Chicago. Cognitive health is measured using the Montreal Cognitive Assessment (MoCA). The results show that having close social ties, being socially engaged, and following certain lifestyles (e.g., exercising) are prospectively linked to better cogn1tive status. Meanwhile, among the 972 participants marked with MCI at the baseline, 22.1% (N=215) became cognitively normal, and 11.5% (N=ll2) progressed into dementia five years later. Social engagement predicts a higher likelihood of transitioning from MCI to normal cognition. Having more close ties, and to a lesser extent, social engagement, appear preventive against the transition from MCI to dementia.  In  these transitions, the role of lifestyle factors is minimum. Social relationship and activity interventions may be fruitful for promoting cognitive health  and  preventing dementia in the middle and later  life.

Ming Wen obtained  a  B.S.  in  Information  Management and Information Systems from Peking University and an M.S. in Statistics and Ph.D. in Sociology from the University of Chicago. She is a professor and former chair in the Department of Sociology at the University of Utah, a former standing member of an NIH study section, and  currently  serving as the Deputy Editor for the  Journal of Health  & Social Behavior. She conducts quantitative research on various topics regarding social determinants of health and human development in the  United  States and China. Her US-based studies have examined neighborhood and family effects on a wide range of health and lifestyle outcomes across the  life course. Her recent China-based work focuses on  how  rural and urban origin and residence play a role in child developmental outcomes  and  how  living arrangements and socio-relational resources affect health and well-being among middle-aged and older adults. Her research has been supported by funding from the National Institutes of Health and private foundations. Her articles have been published in high­ impact journals such as Demography, Social Forces, Social Science & Medicine, Social Science & Research, Child Development, and  the  American  Journal  of  Public  Health.