Home>About Us>Seminars & Workshops>Going Solo in China: Prevalence and Characteristics of those who Live Alone, 2010 to 2050
Seminar / Workshop Details 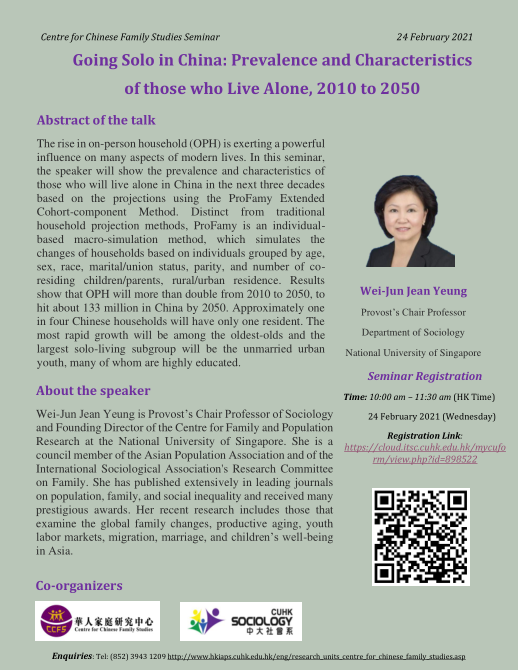 Abstract of the talk

The rise in on-person household (OPH) is exerting a powerful influence on many aspects of modern lives. In this seminar, the speaker will show the prevalence and characteristics of those who will live alone in China in the next three decades based on the projections using the ProFamy Extended Cohort-component Method. Distinct from traditional household projection methods, ProFamy is an individual- based macro-simulation method, which simulates the changes of households based on individuals grouped by age, sex, race, marital/union status, parity, and number of co-residing children/parents, rural/urban residence. Results show that OPH will more than double from 2010 to 2050, to hit about 133 million in China by 2050. Approximately one in four Chinese households will have only one resident. The most rapid growth will be among the oldest-olds and the largest solo-living subgroup will be the unmarried urban youth, many of whom are highly educated.

Wei-Jun Jean Yeung is Provost’s Chair Professor of Sociology and Founding Director of the Centre for Family and Population Research at the National University of Singapore. She is a council member of the Asian Population Association and of the International Sociological Association’s Research Committee on Family. She has published extensively in leading journals on population, family, and social inequality and received many prestigious awards. Her recent research includes those that examine the global family changes, productive aging, youth labor markets, migration, marriage, and children’s well-being in Asia.